O.K., before I even attempt to write a post on a Cuban refugee boat let immediately state that nothing I can possibly scribe will ever accurately give credit to the brave souls that made this voyage. How can I possibly tell the story of a Cuban refugee

raft? How do I, who was born American and thereby the recipient of all the privileges and financial opportunities my citizenship grants, give this subject all the credit it deserves? The only thing I can possibly hope for is to somehow convey my sense awe and true appreciation for this vessel and the people who built it and navigated it across some of the most dangerous waters found in the world.

I am sure that there has been a lot written about Cubans crossing the 100 miles of open ocean to reach the shores of the U.S.. Personally I know of at least two Cuban friends who made the crossing as kids. Their stories are unique and I am totally humbled to have heard their recollections. Having sailed similar distances in a well equipped craft with equally well experienced crew I certainty appreciate the task at hand.

I am sure that this boat was well thought out. The materials used to build it were certainly well thought out. The hull looked to be the remnants of an older metal boat. The creative use of tarps and spray foam to fabricate the floats were crude but practical. The choice of a diesel engine directly coupled to the flywheel which drove a driveshaft to the propeller made sense for a boat more concerned with going forward then backward. The fact is that this boat is even here is testament to it’s seaworthiness.

The safety rails were especially unique. Hand cut timbers lashed to metal rods and securely fastened to the floatation would certainly provide an element of support, in even the steepest waves. Again, as with the hull and propulsion, the rails were crude, but well constructed, though not by modern standards.

From a mariners perspective this vessel was capable of the task it faced but  would I have chose to sail it across the infamous straits of Florida? I don’t think so. Would I have chosen to leave family and friends of whom I have loved and grew up with? Not a chance. So my admiration and fascination for this boat, it’s captain and it’s passengers is unabated.

What could possibly be so important, so worth the risk of leaving everything behind, as to build a boat out of scraps, and sail to America? I have heard that it’s economic freedom. The American media would lead us to believe that Castro’s political oppression is the big motivator. My cuban refugee friends tell me differently but even it is as bad as the media presents would I have the courage to make the trip? Nope. The only thing I am left with is belief that these people, these Cuban Refugees, are a cut above the rest of us. They make these voyages in makeshift rafts because they have heart. I see their heart in their boats and if you look close you will to. 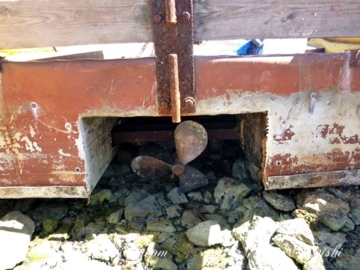 Born in Port Hueneme, California, I have always been no more than a scent away from salt water. I was lucky enough to have an adventurous father who shared his zeal for water with my brother and I. My first sailboat experience happened on my eight birthday when my dad let me solo a sunfish on the Mayport Naval base. From there my fascination for sailing paved the way for a life of adventure, eventually leading me to my wife, Trish. Now-a-days we find ourselves in love with Florida Keys and sharing our fascination for the Key's ecology. Namaste' Sailing/Keys Eco-Tours was founded in 2004, and with lots of luck and heart, we pay tribute to our good fortune by sharing beautiful and thoughtful content with the world wide web better known as the internet.

Manatees in the Mangroves